It’s a long way to come from Costa Rica to Finland – both in terms of distance and culture. Formerly a footballer in his native country, José Barboza moved to Porvoo in 2013 and decided to use his passion for the global game of football as a tool to bridge the cultural gap.

– I wanted to introduce myself to the Finnish society, and luckily, football is one of those sports that will always give the possibility to get to know people through the sport. Here in Porvoo, there was a small club called Akilles. I just asked them if there was any possibility to help out, Barboza recalls the story of how he got welcomed to Finnish football.

After a couple of years with Akilles, the larger club in Porvoo – FC Futura – had seen enough of Barboza’s coaching and asked him to join their ranks as a coach. Ever since, Barboza has been coaching kids at Futura, and was awarded as one of the Kids Coaches of the Year in Finland at the end of 2021.

He was given the award for his good results at Futura and for being an inspirational coach who has a strong will to teach his players.

– I enjoy it very much when I see my players are developing, Barboza confirms.

His coaching philosophy stems from the ideas that mastering the ball at a young age is the key to success as a footballer, and that kids do not even want to pass the ball at an egocentric age. Therefore, Barboza coaches his kids by letting them do as many things with the ball as possible – to dribble four or five players if they can.

What he most enjoys about coaching is when he sees his players do skills they were previously unable to do.

– Things that make me happy are when I see a kid first learn a skill, like a “croqueta”, or an outside or an inside cut, or a step-over, or a 360 over a ball – we call it the Maradona turn, I don’t know how to call it in English, in a formal practice – then get it to a functional practise, and finally to a game situation. Or when I see a kid who, previously, could not use the left foot or the right foot is able to receive the ball, to make a dribble and to pass the ball using the weaker foot. That is the best payment I get from the sport.

“Instead of challenging themselves, they pass the ball to someone else”

Barboza has not encountered many difficulties getting integrated in the Finnish society. He emphasizes over and over again how lovely and kind he thinks Finnish people are. On the pitch, he still coaches in English – which most kids can’t yet understand – but does not feel the language has been an insurmountable barrier, either.

– As I said, when I coach, I focus more on the individual. We rarely talk with the players about how things should happen in the field. I leave that part more to the interpretation of the player. It can be really simple, we just say to the guys - “listen boys, we’re gonna play a 2v2, kaksi vastaan kaksi”. We show them that we are seeking this situation, or we are looking for the ball to come through that channel, or we are looking for the pressure to come from that side. That’s it, Barboza says.

Getting involved in something that one has a passion for is a good way to integrate in a foreign country.

– It made it faster for me to understand how things are working here. It’s also a good way to get to know and practice the language a bit. I speak Swedish, but I also speak a little bit of Finnish. I hang out with a lot of people and try to talk to as many people as I can, Barboza describes his experiences.

Still, there is one place in Finland where Barboza has faced a culture clash – it’s the way he coaches football. Many people in Finland prefer seeing kids teams play the passing game over the way Barboza’s teams play, with kids trying to dribble players rather than going for the pass.

It is Barboza’s wish that people understood better why he coaches like he does.

– Coming from Latin America, it is my opinion that one of the biggest flaws in Finnish football is that the players are poor in the offensive 1v1 situations, Barboza says.

To support his views, Barboza explains that he has been observing training in several other countries too.

He argues that the academies of bigger Finnish clubs pay too much attention to team structure from a very early age on.

He believes that kids do not generally have the capacity to play against the instructions from their coaches.

– Internally motivated kids are the ones doing a lot with the ball on their own, playing outside with their friends. They have many more tools than the player who is only attending training – they can dribble, have more creative capacity and become much more experienced in different kinds of situations, Barboza describes.

He thinks externally motivated kids can also become footballers, but they need to be lucky to be in the right environment and have coaches that can stimulate and get the motivation out of them.

– Those kids might be really talented, but if they don’t have the right coaches, they often say at 14 or 15 years old, “no listen, I don’t have motivation, I have never enjoyed this thing, thank you, but no thank you” and quit, Barboza worries.

“If you try 20 times, you can be sure to succeed once or twice”

As a Latin American, Barboza wishes that people in Finland could see how some of the most attractive players in today’s game trained when they were kids.

– Brazilian players like Neymar, Vinicius or Antony did not become that good at it by passing the ball at 10 years old, Barboza says and quotes Marcelo Bielsa. “The biggest truth in football is that you have to be able to beat your opponent. If you cannot beat your straight opponent on the pitch, the possibilities are very limited”.

– At 15 or 16 years of age, players here tend to lack critical offensive 1v1 abilities and struggle to keep the ball under pressure. Those are skills that you have to motorically learn as a kid. To learn them as a kid, you have to be brave, to learn to try and to dare to try, Barboza says.

– But maybe it’s something we don’t pay attention to. Maybe we watch the kids’ game through the concept of “which team is better”, and “which looks most beautiful on the pitch”, Barboza continues – believing that this is counterproductive. It is extremely rare to get more than a couple of professional players out of one single junior team anywhere.

– I think that we look for excellence very early without allowing failure as much. By not allowing failure, we are cutting the creativity and also the daring of the player. If your creativity levels and daring are not at a top level when you are 15 or 16, your possibilities of playing in certain scenarios are very limited, Barboza worries.

To Barboza, it doesn’t matter if a kid makes a mistake on the pitch.

– When a kid tries to do something over and over again, you might go to them as a coach, and ask  “what are you doing, you are losing the ball”. However, if you let the kid do the same thing 20 times, you can be sure the kid is going to succeed once or twice.  When the kid succeeds and learns the timing, the momentum of the skill, the kid is going to master the skill. When the kid masters the skill, that’s a massive tool for the big game, Barboza says.

Therefore, he thinks that the right solution is letting the kids play.

– Nothing bad is going to happen when a kid is trying to dribble one, two, three defenders! This kid will be closer to achieving the dream than the kid who is not trying. I can guarantee you that, 150 percent.

In spite of differences in footballing philosophies between him and his new home country, Barboza wants to emphasize that he doesn’t want to criticize anybody in Finland. He’s saying he only wishes the best for football in the country.

– I have a daughter, she is Finnish, and I wish that one day I can go and watch a World Cup with her, and wear a Finland shirt with her. Maybe that’s my dream, because she doesn’t like football! That would be the only way I could get her to watch the game, Barboza laughs.

– But that’s the solid wish. I would probably cry the day I see Finland play in a World Cup.

Final question – what’s the single most important thing when coaching kids in football?

– Patience. This is about patience, Barboza replies without hesitation, explaining how that development doesn’t happen in one hour, or even in one year. There are talented kids who might be late-developing biologically or mentally at a certain age.

That’s why Barboza wants to avoid making conclusions about players early. He says this is something he learned while getting coaching education in Argentina and visiting massive, historic clubs like Boca Juniors and Vélez Sarsfield.

– They have kids there who were so extraordinarily good when they were 12 years old that you would not believe it if I told you. But when the kids were 15, they just didn’t break through, while others did.

– For coaches, patience, love and letting the kids be kids is extraordinarily important. Every player you have, who has any kind of quality – you have to love them, engage them in the sport. They are always potential national team players, Barboza concludes. 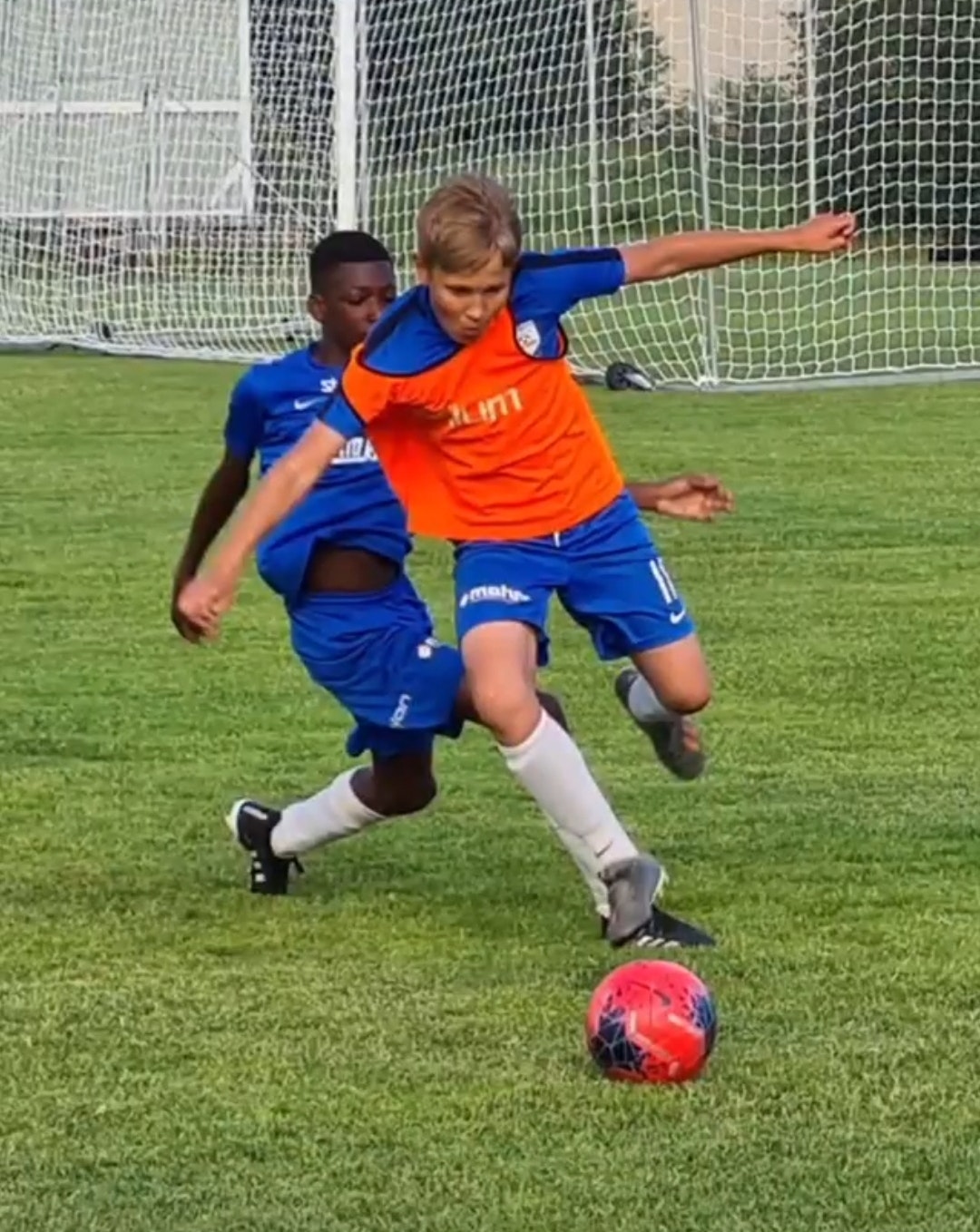